The final drawings: Building on our own momentum 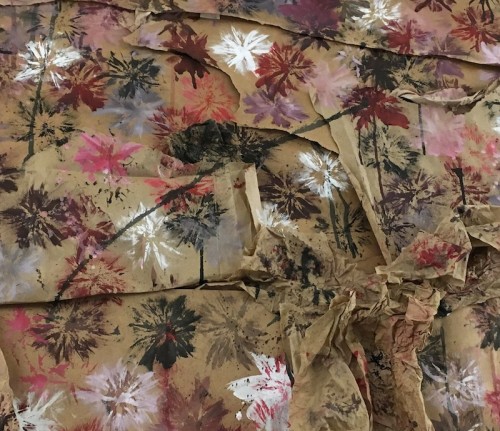 As usual, it’s hard to believe another semester has whizzed by. We exhibited our final drawing projects at an open studio reception, which was fun.

I was blown away by the work my fellow students did, so decided to focus on some of their projects instead of mine. These are images from the reception and some excerpts from interviews I did that night.

I’ll begin with Angela Knox, who went outside her comfort zone and produced a gigantic gridded self-portrait. She had done a smaller drawing of just her lip for an earlier assignment. She made a grid on a photograph and upsized it to her drawing surface. Then she copied the details in each square, one by one. It’s laborious work.

Some squares were left empty on purpose. “People asked me if I would leave some blank and I liked the idea,” she said. “It took it from photorealistic to abstract. I also liked that the square in the middle of the eye was perfectly placed.”

Angela also displayed a piece that she especially enjoyed doing this semester. “I love working with tape,” she said. “I like the technique — it’s more hands on and you get dirty.”

She dipped tape in water and graphite powder, arranged it on bristol board and painted over the entire surface with more graphite and water. When everything was dry, she carefully removed the tape and Voila! So cool. Sam Vachon’s process was the opposite of Angela’s. He went into his drawing with no expectations and let whatever surfaced to flow out. Stream of consciousness. He did nine separate drawings, but they are all connected. The top right one was his first, which was for an earlier assignment. “I knew I wanted to do more,” he explained. “I just knew it could be expanded upon and then I just let the rest flow out.”

When he looks at it, he thinks of a shell factory. “It’s just applying mechanics to natural shapes,” he said. “I don’t know how else to explain it. Three-dimensional surfaces. I really wanted to try to give as much of a sense of depth as possible. I carefully decided where I wanted these lines to go to draw your eye into certain points.”

His favorite square is the first one, but he also likes how the four in the left bottom section feed into each other. Me, too. I took this closeup before he told me. Chris Armstrong did a detailed drawing of a giant foot! I was spellbound when I first saw him working on it. The details — the fine lines — are amazing. Like Angela’s, it’s a gridded drawing. “I had the image gridded up — a small print,” he said. “I blew it up to large scale and interpreted where the lines were. I like the super-realistic details of the skin.”

In the photo above, Chris and his foot, which he cut out, look as if they’re suspended in mid-air. They’re actually on the floor.

He drew a gridded fist earlier in the semester and enjoyed the process so decided to try it on a different scale. “I wanted to do something bigger,” he said. In the fist drawing, he made the paper a bit concave. He planned to do the same with the foot to add more shape, but it didn’t work out. We all agreed it wasn’t necessary because Chris did such a great job making it look three-dimensional.

What’s he going to do with his oversized foot? “I originally thought of pasting it up against a wall,” he answered, “but I’m not sure what I’ll do with it.”

Emily DeTroy was inspired to do her piece to express the physicality of things. “I started off the semester with a much bigger piece where I was moving around graphite and charcoal,” she said. “I noticed that working bigger was a different way of doing things for me.” She likes working with ink and using materials in different ways and decided the approach would pair well with a big piece.

The end result is mostly made with pieces of brown paper bags and some paper towels. “I wanted to explore the textural side,” she said. “Some of the paper bags are crinkled in certain ways. I liked experimenting with putting the paper towel in different pockets making it come out in different areas. It’s subtle. I like the way it blends pretty well.” The images were made with a calligraphy brush, which she smashed into the paper so it would go in different directions. “I used a fair amount of ink,” she explained, “and would press the bristles with my fingers around it to create the flower effect. The dot is the center of the brush and the explosions afterward are from the bristles.”

You may have noticed the cylinder with the plaster globe and hand in front of her drawing. Props she found in the sculpture lab where had the reception and where we usually had drawing class. (A space filled with inspiration.)

“The piece needed to pop out of the wall a little bit more,” said Emily, “I practiced stamping on a cylindrical object versus a flat surface. It was harder. I had to be more calculated with the drips. The hand reinforces that this is the hand that made it. The white makes a nice contrast.” I grabbed a picture of our professor Michael Shaughnessy, who is also head of the sculpture department, with Damir Porobic, who teaches printing and digital art and desisn at USM.

They were looking at the wonderful ink drawings that Riley Schwarcz did. I didn’t have a chance to interview Riley but loved the spontaneity of her work.

Michael told me that his goal this semester was to have us try lots of techniques, find things we liked, grab onto them and build on our own momentum. “I’ve got to say that you guys did an amazing job,” he said. “You did a lot of ambitious work, large and small, and you pushed personal boundaries. There is no cookie cutter mold here for anything, which is wonderful. You’re finding your voices or, at least, the routes that you might  want to take. It’s inspiring.”

Yes, inspiring. And here’s one more drawing. (I wish I could put up everybody’s.) This one is by Pat Kaczmarek. Isn’t it amazing? One thought on “The final drawings: Building on our own momentum”