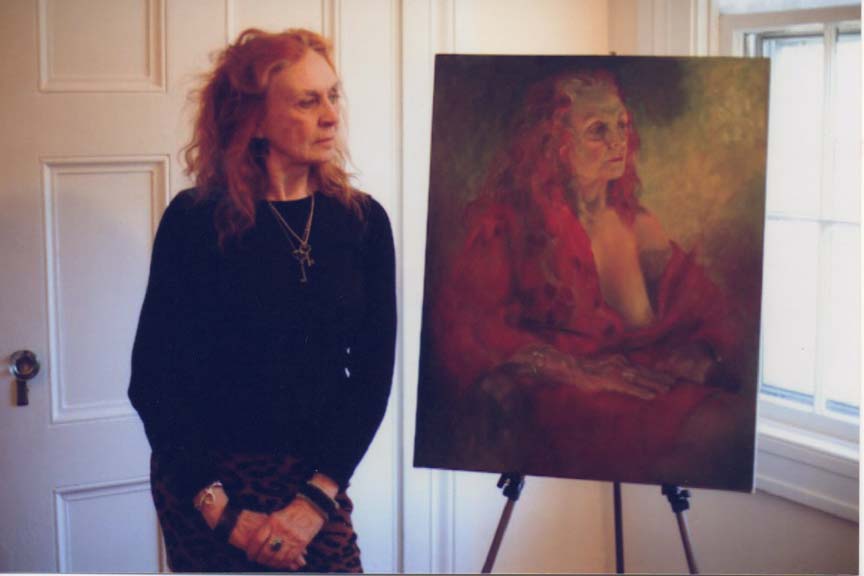 Mary Stanford got the birthday surprise of her life in 2012 when she opened the door to what she thought was a sale. She loves to go junking and so, that’s the ruse her friends Emily Barker and Lynn Hart had cooked up to get her there. They were at her friend Debe Loughlin’s house, but Mary just thought she was trying to get rid of some of her things. “I opened the door and there were all these people,” she says. “Fifty or more people yelling, ‘Surprise!’ I totally lost it. They were snapping pictures. There were artists that I hadn’t seen in a long time and groups of friends and two rooms full of art — just of me. It was really, really quite something.”

Debe ran the Isaac Dyer Art Galleries out of her home in Gorham, so it was fairly easy to set up the exhibit. Mary’s friends had contacted as many artists as they could to invite them to contribute a work they had done of Mary and attend her birthday surprise. Mary Stanford is a life model who has been inspiring artists from Maine and around the country for the past 30 years. She wouldn’t tell me exactly how old she is now, only that she’s over 60. It was artist Don Drake who first asked Mary in 1983 if she would consider posing for his portrait class. When the class was over, the group wanted her to sit for their life modeling class as well. She didn’t know what that meant.  “I said what’s a life modeling class and they said no clothes. I said WOW, well, how hard could that be? I went and it worked out fine. I started getting calls from various drawing groups and then got a call from Maine College of Art, which used to be Portland School of Art, and started modeling there. Then I started modeling for USM and getting calls to model at Bowdoin and Heartwood in Kennebunk and SMCC and all sorts of private groups. I’ve basically worked from Kittery up to Lewiston.”

Don says Mary is a terrific model. “Her gesture poses were always fluid and dynamic,” he explains. “She held poses extremely well, was always dependable and worked hard. She would return to the poses despite students wanting to hang around and talk! Above all, she has a great personality and an even greater sense of humor. Mary’s sense of humor was right there when she told me the story of moving to Maine from Tennessee in 1972. “We packed up the car and brought our 4-year-old son and started driving. We went to Canada and wound up in Bar Harbor and just fell in love with it. We started looking for a rental, but they all said no heat. I said we can’t live without heat, so we headed south to Portland. I was so naive;  I didn’t know what “no heat” meant. We didn’t have that term in the South!”

She is now divorced and her son is grown, with two children of his own and living in New York City as a professional lighting designer for several television shows and movies. Mary’s grandchildren are 9 and 11 and call her YiaYia. It’s the Greek word for grandmother and Mary isn’t Greek, but when she heard the word years ago, she decided, “You know what, when I’m a grandmother, I want to be called YiaYia!”

It may be hard to imagine that someone who is old enough to be a grandmother would still be life modeling, but Mary loves what she does and intends to keep on doing it as long as artists keep calling. “I feel like if people were put off by what my body looks like then they wouldn’t be calling me to draw. They wouldn’t be asking me to model,” she says. ” I also model for lots of private groups and there’s often a lot of older people. I think it makes them feel somewhat of a kinship toward me. I’m in their same age bracket and I’m up there doing this. ” When asked what it’s like to work with Mary, artist Janet Manyan replied, “One word —Supermodel! I’ve worked with her for over fifteen years and she never ceases to amaze. Her intelligence, stamina, and sense of what’s needed in a studio situation.”

Janet did the oil painting above of Mary a few years ago. It was on the cover of the brochure for a University of Southern Maine exhibition. Mary and her boyfriend Danny look at Janet’s original painting, which was on display at her birthday suprise party

Paintings and drawings of Mary hang in a lot of homes and galleries. Her own home is lined with works that artists have given her as gifts and it brings her great joy to hear how a piece that she inspired helped an artist be successful. “Lots of people have told me that their best work is one they had done of me,” she says. “One portrait of me got an artist into grad school. It feels really good to hear that from somebody.”

Being a life model is hard work. You try being still for three hours or even 20 minutes or changing your position every 15 seconds AND coming up with creative poses. “I’m up there giving my best to inspire people,” she says, “and trying to hold still and to do poses that are not static but are something different. I’m trying to move around so people can have various views and everything and that’s work. It’s physically hard work.” Posing for a sculptor is especially challenging. “Sculpture classes are the very hardest to work for,” she explains, “because, unless you’re doing strictly the head, you’re standing on a turntable and you’re basically standing up for three hours. They turn you every five to 10 minutes and you get a little break every half hour, but then you have to come right back to the same pose and many times you’re doing that for two sessions. It’s very demanding.” Demanding, but rewarding. Here’s what sculptor Cynthia Smith says about Mary: “I think what makes Mary so effective as a model is that she not only understands her own body, but she also knows how it will appear to the viewer when she assumes a particular stance or position. She has an artist’s eye for composition … she understands form and space.”

When Cynthia made the sculpture of Mary, she wrote about the process in her blog Meanderings of a Maine Artist. Mary hadn’t seen the sculpture before and was delighted when I showed it to her. Drawing on left by Susie Wren; drawing on right by Joanne Arnold

Many things seem to delight Mary. She enjoys life and even aging doesn’t seem to bother her much. “Nothing you can do about it,” she says. “You just have to get into it. I don’t think the numbers really matter. It’s how you feel inside and how you feel about life. I’ve had younger women say I want to be like you when I reach a certain age. I say just keep hanging in there and have a good time honey, and take care of your body. That’s all you have to do. Why do you have to be a certain way just because you reach a certain age?”

9 thoughts on “Life Model: There’s Something About Mary Stanford”