For the Love of Art and Family 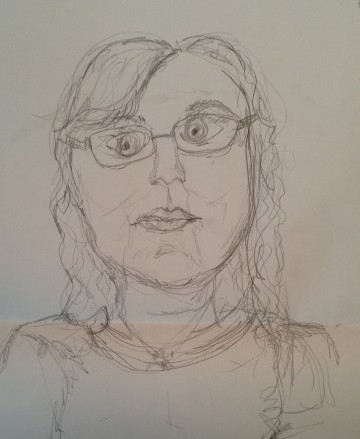 I said I was going to write some posts over winter break, but I didn’t. I had good intentions. You know where that often leads!

Unfortunately, a lot of my break was taken up with a difficult personal issue.  As some of you know, my mother has Alzheimer’s disease. With a lot of support from family and professional caregivers, she is still able to live in her own home. Over the holidays, we had somewhat of a family crisis, which has since been resolved — I hope.

When we’re in the middle of a stressful situation, we don’t always grasp how deeply we may be affected. I’m sure that on the outside I appeared calm, cool and collected as our situation evolved. Inside, I felt just the opposite.  I was so worn out mentally (and physically) that I couldn’t find the time or energy to do anything nurturing for myself.

Before I knew it, winter break was over and I was on my way to my second semester drawing class. Michael Shaughnessy, an installation artist who works with hay, is my professor again. That reminds me of another thing I said I was going to do over break. I was going to ride around with Michael and his hay ball sculpture and write about his work. It was too cold anyway, so we’ve decided to wait for warmer weather. Michael Shaughnessy’s hay ball getting a stony eyeball. (It was strapped to the top of his car, which he says was parked in front of an antique shop.)

On the first day of class we warmed up with contour drawings of each other. How on Earth can we take ourselves seriously after seeing these! It’s love-hate with contour drawings — for me, anyway. It’s so awkward to stand there and stare at someone who is staring back at you just as intently. Once you get beyond that though — get out of your head and start looking, really looking — you begin to notice things. Shapes and curves and turns. Everything slows down and becomes still and quiet. That’s where the love comes in.

As I drove home at the end of the day I felt joyful. I’d been in class for five hours. I realized that not once had I dipped into worry and sadness and stress. Not even when I was being scrutinized by my fellow contour drawers.

And, I have good news about my mother. My sister Mary has taken a leave of absence from her job in Florida and moved up to Maine to live with her for several months. I know — can you imagine? She left Florida for Maine in the middle of winter. More love. I’m so grateful. 6 thoughts on “For the Love of Art and Family”

« Learning to Draw Portraits. I Gave Myself a Facelift Because I Could.
An exhibit by Maine Artist Francine Schrock Opens at House Arts Gallery — Convergence: engaging in the milieu »