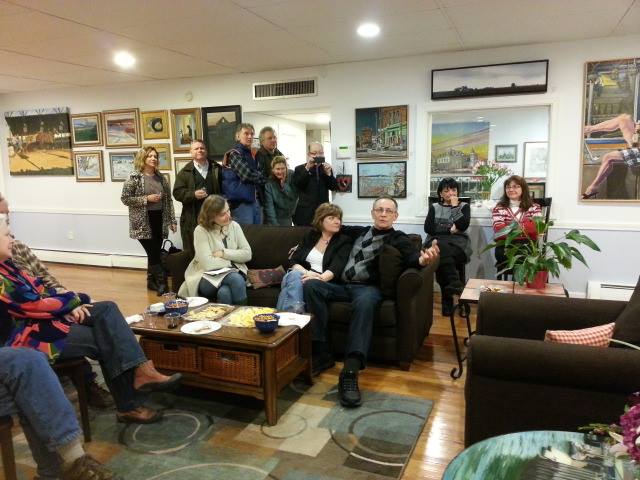 When I first met Francine Schrock, she had just finished creating a beautiful mural for a memory care facility in Portland. Her grandmother died of Alzheimer’s, so the project had special meaning and she went on to paint more murals in other facilities. You can read about the first mural in my health and wellness blog Catching Health.

This past week, House Arts Gallery in Gray held an opening reception for Francine’s latest body of work. I was delighted to be able to attend. In her opening comments, Francine explained that the idea behind the paintings began forming in her mind about two or three years ago. She was flying back from St. Croix, where she does another show ever year, and happened to look out the window as they passed over the Bahamas. This is a painting of what she saw: The curved horizon in the distance made her think about the “membrane that surrounds the Earth. That few thousand feet is where we live — in the milieu.”

Milieu: the physical or social setting in which something occurs or develops : environment.

Francine’s exhibit is her interpretation of how things (human and otherwise) converge as they engage in the milieu.

Pollinating bees, for instance. In one of the paintings, a bee appears to be in a frenzy as it converges with a flower, urgently trying to get at its pollen. Last summer, as a thunderstorm approached, Francine says she was suddenly overtaken by its sight and smell. She snapped 658 consecutive photographs. “It’s important to capture all the moments in time,” she says. “Like that moment a storm is overhead and lightening lights up everything — you can see everything for just a second. It raises something in you.”

Convergence includes several storm paintings, including this one: While some of Francine’s paintings depict the “nature of nature,” others capture the nature of human beings. Mark Grover purchased Nurture #2, a painting of an intimate moment between a man and a woman.

“This work clearly reflects the theme of the series,” he says. “In this instance, with the approach of male and female, of tender lovers, of mutual giver and receiver. The participants are portrayed incompletely, mysteriously, enveloping us all. Passion is implied yet still ineffable. The viewer is invited to complete the image through their own experience.”

Anne McCormack, who attended the reception, summed up her opinion of the show, including the controversial painting, this way: “For me, the entire exhibit is filled with love. I think Francine nailed it, so thank you very much.”

As I’m sure you’ve noticed, I made the decision not to include Nurture #3 in this post. You can see it, along with the entire Convergence exhibit and works by several other local artists, at House Arts Gallery, which is located at 3 Main Street in Gray.

« For the Love of Art and Family
Playing with Gesso »