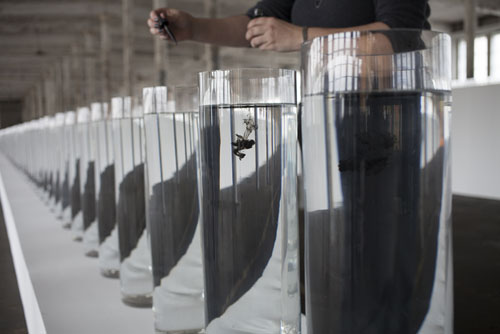 Amy Stacey Curtis, who has lived in Maine since 1986, says her work “physically exists as art only when installed in a space and activated by an audience.”

Over the past 17 years, Amy has installed eight solo-biennial exhibits. For each, she has chosen a Maine mill as her space. Her first exhibit was in the Bates Mill in Lewiston. That is where she’d like to have her ninth and final exhibit in September 2016.

Each exhibit, which consists of nine installations, explores a different theme. In some way, the audience is asked to participate. For instance, they may need to alter the work, or maintain it, or enter it. Amy says she tries to “convey that we affect everyone and everything while everyone and everything affects us, no matter how small or fleeting the contact.”

I didn’t know about Amy’s solo-biennials until this year when she visited our drawing class at USM. The professor, Michael Shaughnessy, had this to say about her:

Amy is one of the most hard working and focused artists I know. Her work is elegant and conceptually innovative. Highly controlled and methodical, she embraces with a robust laugh the magic born of the accidental. She charts a course and sticks to it with a perseverance which is both personal and poetic in its own right.

Wherever her final exhibit is, I will be there. In this Profile of a Maine Artist, Amy tells us a little about herself and where she finds inspiration. First, I chose one photo from one installation from each of her past eight biennials to give you a sense of the magnitude and the depth of her work. EXPERIENCE Succession III, plastic, water, India ink, audience.
Water in each of seventy rows of seventy vials (4,900 total) precisely and gradually changed from black to clear, evaporating during the exhibit. CHANGE Shift I, 9 pedestals, miscellaneous, audience. Invitation instructions: “Bring small personal possession with which you can part forever.” At the opening, Curtis placed upon each of nine pedestals a personal possession. The audience asked to choose object upon one pedestal, replace the object with object brought, and to take home object removed. Hundreds of objects were given and taken. LIGHT Modulation I, 8,118 aluminum cans and 4-color prints, audience. Originally, from Curtis’ CHANGE, presented in larger scale, audience walked around installation as its perceived hue collectively changed from red to orange to yellow to green to blue to violet to red. TIME Lux III, 99 hourglasses, pedestal, labels, audience.
One hourglass for each hour of biennial on a 64-foot-long pedestal, Curtis inverted the first hourglass at 12 pm on October 9, 2010, marking the start of the exhibit. Subsequent hourglasses were inverted successively by Curtis and participants, one per exhibit hour.

6. TIME was installed throughout the Pepperell Mill in Biddeford, Maine October 9-28, 2010. MATTER Succession IV, 99 glass containers, water, 18 eye-dropper bottles, ink, ledger, ledger pedestal, pencil, audience, 10.4.14-10.24.14 Curtis set out to instruct each of 550 participants to add 9 drops of black ink to 99 cylindrical glass containers of water. If all participants added ink as instructed, water from first container to 99th container would gradually darken from clear to black by precise amounts. Each participant initialed line of instruction in ledger, ledger indicating how many drops of ink to add to which container(s). Photo: Luc Demers. “Here is a prototype for MEMORY‘s 99 desks and stools. To suggest a child’s writing desk, an adult will just fit. All will be painted white, of course, and each will have a different book… I am using most of the plywood from MATTER to make them…”

9. The ninth and final sol-biennial exhibit MEMORY will be installed throughout 25, 000 square feet of a to be announced Lewiston, Maine mill. Opening: Saturday, September 17, 2016 High school: Haystack is My Hogwarts.

I received my BA in Studio Art and BA in Advertising from the University of Maine in 1993 and my MA in Art and Psychology from Vermont College in 2000.

What is your preferred medium and why? Where do you find inspiration?

Just before what would be my first biennial in 2000, I completed a Master’s in Art & Psychology at Vermont College. Part of my thesis had involved deep critical thinking about my imagery up to that point. It was then that I noticed patterns of repetition and chaos coupled with order throughout all of my work, as well as in everything around me — every surface, activity, happening …

I came to see the balance or sum of chaos, order, and repetition as a sort of equation for everything, an archetype for the interconnectedness of all.

Through the imagery of my first solo biennial (see next question), I set out to intentionally explore the balance of chaos, order, and repetition, to begin to think about our part in the whole and how I could convey this to others.

Through temporary interactive installation, I could create a tactile metaphor about how we have effect on the whole and the whole has effect upon us even if this impact or influence is momentary.

In 1998, I began an 18-year commitment to art-making, a project culminating through nine solo-biennial exhibits of interactive installation art from the year 2000 to 2016. In the end, I will have installed 81 large-in-scope, temporary works in the vast mills of eight or nine Maine towns.

Each biennial exhibit is a 22-month process from conceptualization to documentation. Each exhibit explores a different theme while requiring audience to participate with its nine installations and revitalizing its historic site. After the biennial, my work exists only through documentation, dialogue, and memory.

To see/read more about my process subscribe to [my blog] The Artist Plan.

Do you have some words of wisdom for beginning artists?

You can accomplish anything you want to from wherever you live if you are willing to work hard. Also, I teach professional development at the University of Maine. Readers can acquire my essays on my website.

How can we find out where your 9th and final solo biennial will be and follow your progress?

The only way to know my last location for sure is to write me to be added to my e-mail notification list amy@amystaceycurtis.com.

How can we see work from previous biennials? 2 thoughts on “Amy Stacey Curtis and MEMORY: Her final biennial”

« Learning to be an artist. Making progress and works in progress
The final drawings: Building on our own momentum »